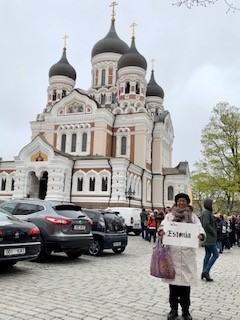 Sylvia Keys is one of our most active and widely-traveled group members. In April 2019 she took a Baltic cruise on the MSC Meraviglia and visited Iceland, Copenhagen, Estonia,  St. Petersburg, Kiel and Helsinki.  Here is a journal of her journey.

Cruising to St Petersburg Russia turned out to be an unexpected pleasure. Two years ago, my Travel Dawgs and I discussed what our next adventure would be. Someone mentioned Russia. I had never thought of visiting that country. Fast forward to April 2019.

The Travel Dawgs planned a return trip to Morocco and Spain. Since we’d just been there six months prior, I didn’t want to return so soon, I decided to cruise SOLO to the Baltic Sea, which included….Russia.

I selected the MSC cruise line because I like their ports of call, their cabin sizes and I had MSC cruise points.

I was extremely apprehensive about cruising alone, however the Dawgs will never want to travel there (too cold), so this was my opportunity.

I have sailed the Caribbean solo before, and lived in Europe years ago, however I had never SAILED solo to Europe before.

This was my pre-cruise checklist:

I also picked up the Apple package of wall plugs for over 20 countries….just in case. I was ready… or so I thought.

Monday, one week prior to SUNDAY flight, I get an email from SAS, welcoming me, to my much-anticipated flight on SUNDAY. Yay!

Tuesday, another email from SAS, which I didn’t read, however, I saw the words “if u want to rebook”. Why would I want to rebook? I didn’t pay any attention to the rest of the email, I just kept packing.

On Thursday, I get another email from SAS, which I did read, stating that the airline SAS pilots were going on strike…Saturday…. THE DAY BEFORE MY FLIGHT TO COPENHAGEN!

I was stunned. OMG …fast decisions had to be made. I did shed a tear or two, then thought of my options:

Cancel everything  or, MAKE THIS TRIP HAPPEN.

Right away. I called travel friends to get their advice and thoughts.

Some said take a chance and go to the airport anyway on Sunday; IN THE EVENT, the strike is over by then. Hmmm. I’m not a gambler.

Others said, cancel everything and rebook the cruise, sometime in the near future. Booooooo.

I decided to make this trip happen, until the Universe threw up another challenge to make me stop.

I called SAS and canceled flight to Copenhagen (no cancelation fee, thank you very much), but kept the return flight HOPING the strike would be over in one week. I’m guessing at this point.

Went online and found other airlines flying to Denmark albeit WITH LAYOVERS.

There were many flights, however in my opinion some of the layovers were too dicey for me.

I “lucked up” and found an Icelandair flight, leaving on FRIDAY (two days ahead of my initial reservation) and arriving In Copenhagen, on SATURDAY, a day before the cruise, with a two-hour layover in Iceland.

Iceland?   I. C. E. L. A. N. D. Iceland was never on my bucket list, never knew anyone who had been there or knew anyone from there. What the heck. The clock was ticking.

I bought a one-way ticket, two days before the new flight. Mo money, however the Universe was keeping me going. Two seats were left. Snatched one (please don’t be a middle seat).

I also had to book a hotel in Copenhagen. I booked a Marriott near the airport. I can’t do Airbnbs, too old school, plus I had some points with Marriott. Traveling solo. Have to be safe.

The flight from the East coast to Iceland is only six hours, nice. Ok. Let’s do this.

The light was superior. I met and talked with millennials from Scandinavia. Everyone was so nice and friendly. They also turned me onto a nice app, called BEEN, which tracks your travels. The adventure had begun. 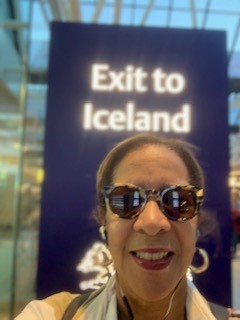 We had a two-hour layover in Iceland, so I went straight to the gift stores.

Since I’m from Chicago, I thought I had seen winter clothes.

Oh my. The winter clothes were off the hook in Iceland. Survival clothes. 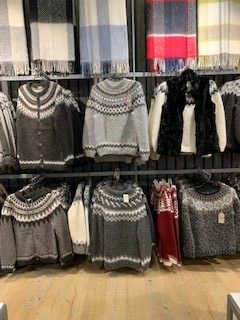 I bought, as gag gifts, wool gloves, sans tips, so you could text, as well as looooong wool scarves. Which, as it turned out saved me on the trip. I wore all of them.

The flight to Copenhagen took all of two hours. I landed in Copenhagen on a lovely Fall- like day, even though it was May.

The following are my reviews of my favorite ports of call for the most fascinating, educational, beautiful, insightful, friendly, awesome and yes stressful due to the strike, cruise I have ever taken. And I enjoyed every nanosecond of it.

BTW, the strike ended two days before my flight home. SAS had salmon and unlimited free drinks all the way back home. Great flight.

The airport was large with an abundance of stores and shops.

I found felted soap, which is a combined soap and washcloth. Upon returning home, Amazon has similar soaps! 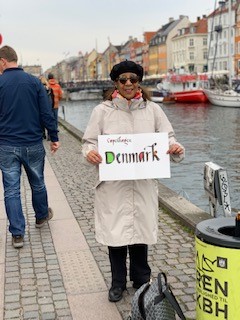 I had booked a Marriott, and actually used the Apple converter plugs. Other travelers did not bring converters, so they had to have the Reception desk charge their gadgets. At one time I saw over 20 smartphones being charged.

Lol. I even thought about my BFTT family. 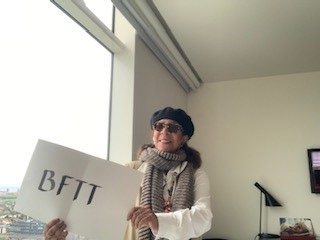 I toured on a Hop on Hop off bus, which lasted four hours. A Japanese couple “adopted” me, and we toured all day together.

Copenhagen is a beautiful, upscale, cosmopolitan and diverse city, originally a Viking fishing village established in the 10th century. 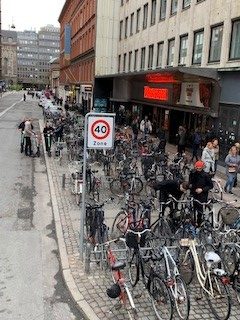 What truly amazed me about Copenhagen was that every person has at least 1.5 bicycles.

Beautiful bicycles. You saw bicycles everywhere; there are dedicated bike lanes all over. Bikes were sitting at shopping malls, on streets, near the Metro stations…and NONE OF THEM HAD LOCKS ON THEM. To be clear, the Danes do not lock their bikes in Copenhagen. Think about that.

WEATHER: 40 degrees, grey skies, drizzle, then off and on downpours. Some ship passengers booked the bicycle excursions…we saw them fly by…and none looked happy with their decision. 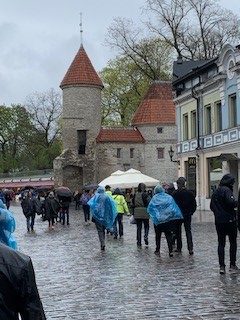 Tallinn is the capital and largest city of Estonia. It is on the northern coast of the country, on the shore of the Gulf of Finland in Harju County. From the 13th century until 1918 (and briefly during the Nazi occupation of Estonia from 1941 to 1944), the city was known as Reval. Tallinn occupies an area of 159.2 km (61.5 sq mi) and has a population of 434,562.I didn’t take any shore food photos in any of the ports, because the tours were so busy, there wasn’t time to eat. I only ate on the ship.

Tallinn has become a hub of technical inventions. The software for Skype and Angry Birds were developed here, said the tour guide. There are lots of parks and forests.

People commute to Finland for work. New mothers are paid for 1.5 years, and their jobs are kept for them. We even visited a medieval village with a McDonalds in the middle of it. 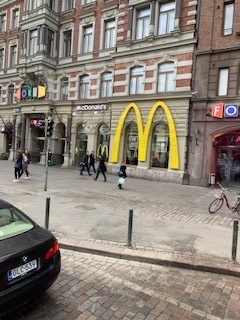 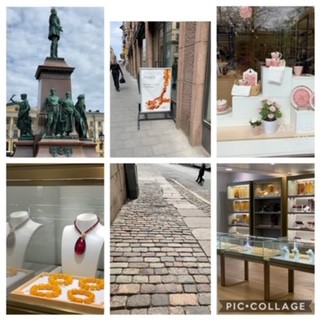 WEATHER: 75 degrees!!!My favorite port of call. I was expecting gray skies and grim people. It was gorgeous, historical, scenic and friendly.

Saint Petersburg is famous for its beautiful palaces, picturesque canals, singing bascule bridges. Golden fountains, famous paintings – and impressive cathedrals. Russia gets 30 days of sunshine a year. We lucked up. The weather was gorgeous. 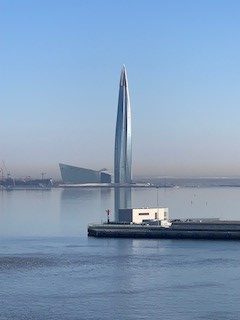 It is a beautiful city. Very well laid out. Everyone was speaking English and everyone was friendly. 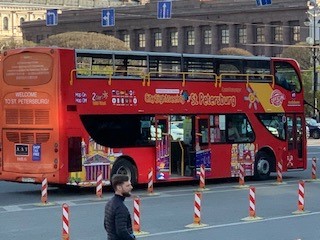 I only saw one brown face, during my eight hours of touring, and I believe she was East Indian.

You don’t need a visa, IF you are on a cruise excursion, and you stayed with the group. If you don’t book a cruise excursion, you would have to have a Russian visa before sailing or you couldn’t get off the ship. When disembarking we were told if we lost our passports, we could not get back on the ship. The American Embassy is in Moscow.

Both tour guides told us that  there were pickpockets on the tourist paths, and warned us to  guard our belongings. 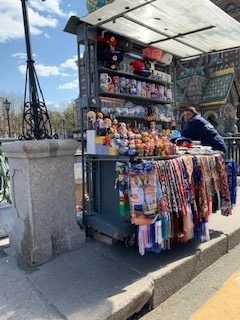 The tours were awesome. We visited castles, churches, parks, souvenir outlets, saw a parade and drove around St Petersburg for hours.

There are 65 waterways in St Pete’s, and about 20 of them have bridges that go up.

St Petes used to be called Petrograd, then Leningrad and now St Petersburg. There are hundreds of museums, a vodka museum, a bread museum etc. Seven million people live in St Petes.

We stayed on the tourist track, and thus everyone was smiling and happy and everyone spoke English. We visited the Cathedral of Saint Petersburg that had gold everywhere. 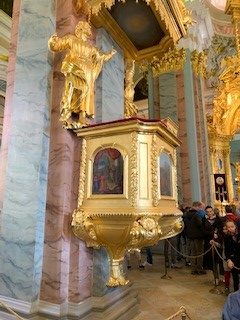 The remains of the Romanov family were buried in this cathedral in 1998, and the buried Romanovs were declared saints in the Russian Orthodox church. But two of the children’s remains were missing: Maria and Alexei.

While in the church, we heard a private hymn sung by the “famous” Russian priests. It was humbling and awesome. We were told not to film or audiotape the event. Some of us did. It was beautiful. 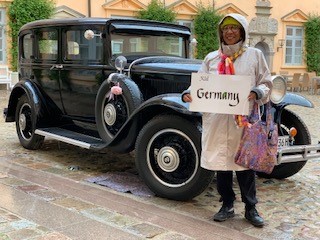 WEATHER: very cold, high 30s, it was grey and cloudy, then it rained and hailed.

Kiel is the capital and most populous city in the northern German state of Schleswig-Holstein, with a population of 249,023 (2016).

There are 700 fishing companies here and lots of windmills, which supply electricity to the area.Its 23% forest, selling over 800,000 Christmas trees a year. 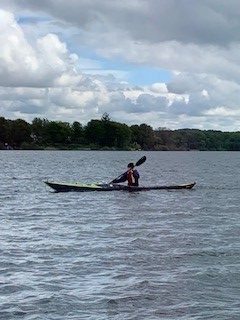 We visited the Plon castle, which was lovely. And to our lucky surprise, we saw a wedding party arrive in an old Model T Ford. 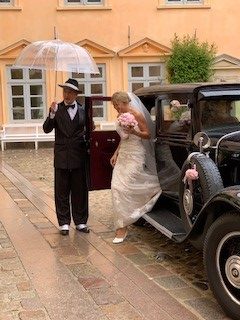 We stopped in a small village for 20 minutes of shopping, restroom stop and food. I asked a small restaurant for hot chocolate. They didn’t know what that was. I ended up having a nice hot cappuccino. 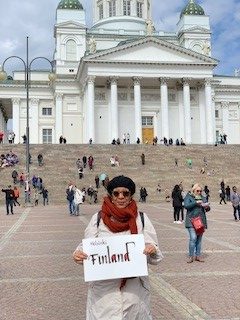 Helsinki is the capital and most populous city of Finland. Located on the shore of the Gulf of Finland, it is the seat of the region of Uusimaa in southern Finland, and has a population of 650,058. 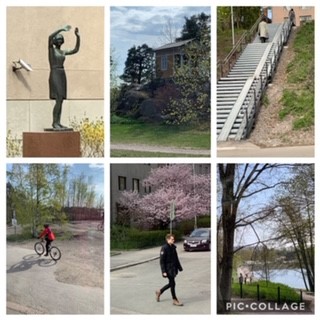 We arrived in Helsinki on May 1st, which was their day of celebration. There were lots of balloons and white hats.

May 1 is Labour Day in many countries, including Finland. However, the Finns also see it as a chance to celebrate the arrival of spring, and numerous festive student traditions are also associated with the date. In fact, just about everyone gets in on the action – May Day and the preceding evening represent the biggest party of the year. There were students with decorated outfits on, wearing white hats and balloons for sale, everywhere. The streets were packed with happy celebrations. There were no medieval structures in Helsinki.

The Meraviglia, one of the largest in the MSC fleet, carried 5000 passengers, 1500 support staff.  I cruised with  Russians, Italians, 10 Americans (2 brown), Canadians and Australians. The cabin was large with balcony, private elevator on our wing. I needed a balcony, so I wouldn’t feel isolated. 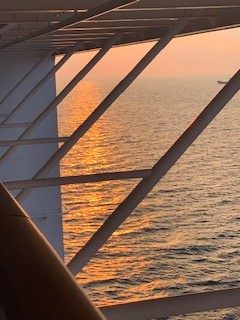 My cabin was only one level down from food and pool. However given the temperature, I didn’t make much use of that pool. 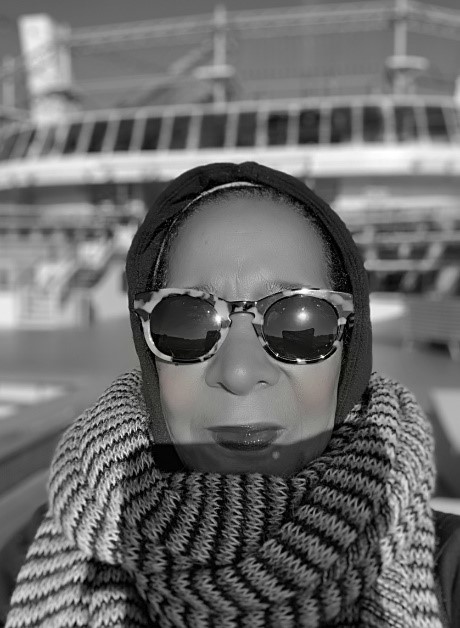 It was one the best cruises, I’ve ever taken. Very beautiful and educational.

I would like to return to Russia, however, with friends so we could visit the side streets.