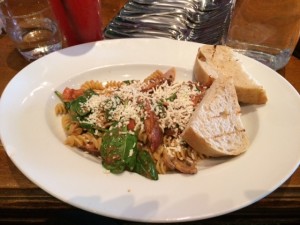 Exploring downtown Palo Alto is always an enjoyable way to spend an afternoon. The area offers an assortment of trendy boutiques and specialty restaurants. On a recent Saturday afternoon, while circling the block in search of a parking space we happened across Nola. At first we weren’t sure what type of restaurant it was, but we could tell by the way customers in the window were sopping their plates that it had to be good. The menu at the doorway described a sumptuous selection of Creole and Cajun menu choices so we had to give it a try. The décor was welcoming and definitely had a Bourbon Street feel. 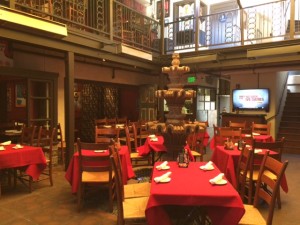 The restaurant has an interesting layout that stretches over three floors and seven charming dining areas. It was mid-afternoon and there weren’t many people dining, so when we walked inside we weren’t quite sure which way to turn. It wasn’t long before we were met by a smiling host who explained that since it was mid afternoon, service was only available in the bar or a lounge-like room filled with comfy leather chairs and small tables. We chose the lounge and were soon settled comfortably to enjoy the décor and flat-screen TVs placed tastefully on several of the walls. The walls also had very interesting artwork. Nola has one of the largest collections of Southern folk art on the West Coast. 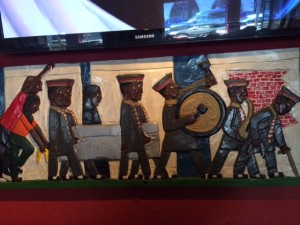 The waitress who came over to take our order was as friendly as the host who ushered us in. Their customer service is great – friendly, but not too familiar. There is a full-service bar with several types of beer on tap and a wine list that offers a wide variety of choices; from $8 wine by the glass to $110 wine by the bottle. I started with a house-made raspberry lemonade, sweetened with agave nectar that was just the right balance of sweet and tart.

For our entrees we ordered the firecracker Cajun pasta with blackened chicken and the chicken & biscuits basket. Both were tasty and well prepared. I especially enjoyed the deep fried dill pickles in the chicken basket and the coleslaw that came with it. The portions were large and well seasoned, however the chef was quite liberal with the salt. So if you’re watching your sodium intake, beware. 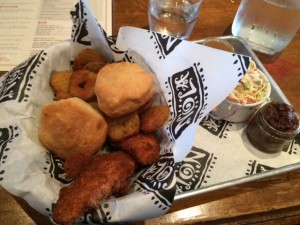 The atmosphere was light, fun and reminiscent of Bourbon Street. It was easy to see why it’s a great happy hour spot. Nola is definitely a place to “Laissez les bon temps roulez”. 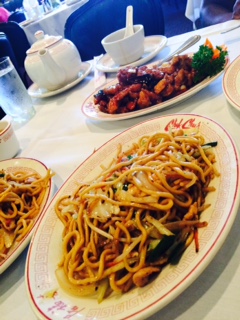 While visiting Palo Alto recently we developed a taste for Chinese food. There are many choices in the area but we decided on Chef Chu’s – and we’re so glad we did. It is a well-established restaurant that has been there for many years. The description on their website states “Established as one of the Peninsula’s best Chinese restaurants, Chef Chu’s is known world-wide for its innovative and delicious cuisine.”

It did not take long to find out how they earned that reputation. Located on a busy corner on the border between Palo Alto and Los Altos, it easy to locate. It is situated in a very attractive area. Parking spaces in front of the restaurant are limited, but there are ample spaces in a nearby lot.

Upon entering the restaurant we were greeted warmly by a pleasant hostess who immediately ushered us to our table in the spacious, beautifully decorated dining room. We enjoyed the lovely décor and the fact that the tables were well placed, so we had plenty of room. Even though we were there during the lunch rush, the atmosphere was calm and relaxed. Service was prompt but we did not feel rushed. The calmness was never interrupted by noise from the kitchen or scrambling wait staff. Our smiling waiter delivered our tea and our entrees at just the right time. 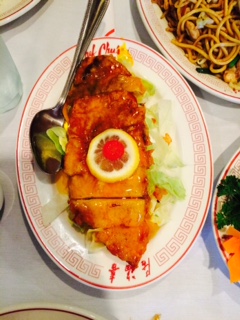 Everything worked like a well-oiled machine. It was obvious that the wait staff were seasoned and experienced.

The gourmet luncheon menu was quite extensive, offering a large variety of delicious dishes to choose from. The average price was $10. After much contemplation we decided on the Tangy Lemon Chicken, Hunan Chicken and Chow Mein. Each dish was prepared to perfection. The lemon chicken offered the perfect balance of citrus and sweet and the deep-fried batter had just the right crunch. The Hunan chicken was savory with just a hint of sesame oil. The chow mein was mixed with an assortment of well-prepared vegetables. Servings were plentiful and each dish, including the chow mein, was artfully presented.

The restaurant is quite spacious and can accommodated large parties in their upstairs dining rooms. 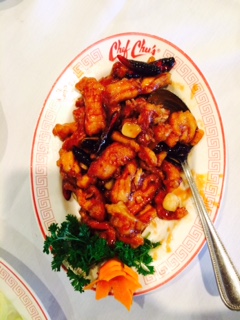 Chef Chu’s is an excellent choice for lunch or dinner. 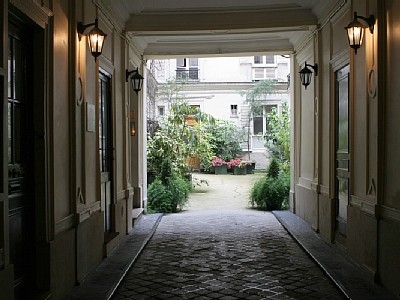 How do you select a hotel when visiting a new city? This was the question that we wrestled with while planning our last  trip to Paris. The moment we entered the Pullman Paris Montparnasse we knew that we had made the right choice. This 4 star hotel is in a great location, right the heart of Paris. The Montparnasse Metro station is right across the street. There are lots of restaurants and cafes within walking distance. It is even within walking distance of the Eiffel Tower.

The hotel is located directly across from the Montparnasse Tower, which is a great place to enjoy aerial views of the city. The tower features Europe’s fastest elevator that can whisk you to the top (685 feet up) in just 38 seconds. So it is a great option if you don’t make it to the top of the Eiffel tower.

It is a popular hotel for business travelers and airline personnel. During our stay we saw several flight crews as we passed through the lobby.

The lobby is very welcoming and has a modern décor. It is colorfully furnished and nicely lit. It is spacious and there are several comfortable seating areas. It also has a very nice bar.

Our standard room was quite spacious and we were especially pleased with the comfortable bed and top quality linens. The bathroom was well appointed with lots of marble and modern fixtures. We also enjoyed the benefit of free WI-FI.

The business center in the lobby is nicely equipped with several computers and printers.

The hotel front desk staff was especially friendly and helpful. They communicated with us easily in English – which was appreciated since we spoke very little French.

One of the amenities that we enjoyed most was the breakfast buffet at the Justine Restaurant. Located in the heart of the hotel it is a bright, cheery space that looks out at the lush hotel garden. Those daily breakfasts were easily some of the best meals we had in Paris. The buffet has a plethora of offerings including fresh fruit, eggs, fresh juices, a variety of meats and melt-in-your-mouth pastries. We had heard that the croissants were indescribably delicious – and indeed they were.

The Pullman Paris Montparnasse is a nice hotel and one that we will definitely choose when we return to the City of Light. 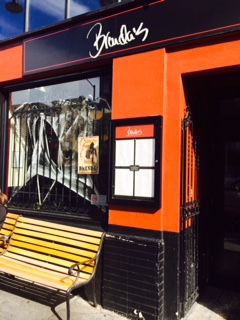 One of our culinary quests has always been to find the best fried chicken in any city that we visit. When we heard rave reviews about the golden bird at Brenda’s French Soul Food restaurant, we knew that we had to check it out. It had been featured on a local food program where diners critique restaurants in the San Francisco Bay Area. According to a recent census, San Francisco has more restaurants per capita than any other city in the United States; so there is a myriad of dining options.

Since San Francisco is only a 50-minute drive from our home we decided to venture over one Monday for lunch. Parking in that city is always at a premium, so we when we found a space right across the street from Brenda’s we knew that this was a good omen.

It was obvious the moment we walked in, that this was a serious eating establishment. A quick scan of the dining room showed diners very engrossed in their meals. Although we arrived in the midst of the lunchtime rush, our wait was only 5 minutes. As we were led to our table we couldn’t help but notice the delectable dishes and mouth-watering aromas that filled the room. 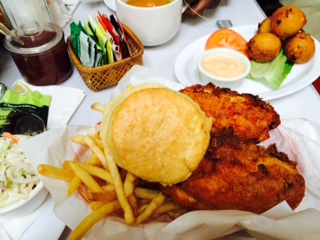 Since Brenda is originally from New Orleans, the menu offers a variety of Cajun selections; gumbo, red beans & rice, muffalettas and even hush puppies. Although the other choices were tempting, we stayed true to our goal – fried chicken – and ordered the BFC (Brenda’s Fried Chicken). It did not disappoint. The two perfectly browned chicken breasts were served with crispy fries, coleslaw and a huge light-as-air biscuit. We also ordered sides of creamy grits and hush puppies. The chicken was perfectly prepared –piping hot, crispy on the outside yet moist and flavorful on the inside. The cole slaw was fresh and crunchy with just the right balance of sweet and tangy. The grits were a bottomless bowl of buttery goodness; and the creamiest we’ve ever had. The hush puppies were served with a chipotle remoulade and were as good as any we’ve ever tasted – even in New Orleans.

The service was quite good; attentive without being intrusive. The staff moved about the compact dining room with precision and ease. The atmosphere was busy without being frantic.

We look forward to returning in the VERY near future to try some of the other menu choices. One that particularly caught our eye was the Sloppy Josephine, a sassy version of a Sloppy Joe made with turkey and served on a warm toasted bun. However, it will be difficult not to order the BFC again – perhaps we’ll take one to go.

If you are a fan of good fried chicken, Brenda’s should be at the top of your list.